Spaces for Drawing | Past Exhibitions at HITE Collection 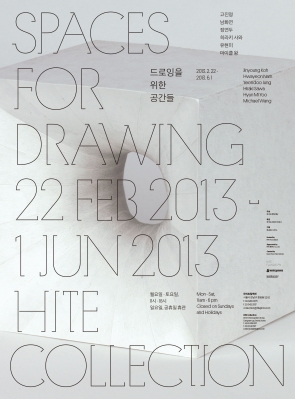 Spaces for Drawing is an exhibition that attempts to analyze drawing from a variety of perspectives. Generally, drawing means an action that depicts the real by composing an object from three dimensions onto a two-dimensional space. But in this exhibition, drawing means the action of ‘drawing’ itself rather than an artistic genre. Because of the development of new media, a variety of forms of drawing methods has appeared. Although the aesthetic definition of drawing has changed in East and West over time, the act of drawing is being expended with human effort along with support from tools or machines in real and virtual space.

This exhibition researches the various forms of drawing and examines the concept of drawing which is expending according to the changes in media and how the artists situate it in their works. Here, the essential meaning of drawing is not significant. This is not an exhibition that researches the meaning of drawing as an artistic genre. Drawing is developing constantly and independently as well as in inseparable combination with other media. This exhibition discovers the concept of drawing which is situated somewhere between a work and a concept and artists’ stances and attitudes concerned with drawing. In contemporary art, classification of media has become meaningless, so this research, concerned with drawing, is an attempt to reveal an intermediate stage of process from the beginning, involving the artists’ groping in the initial process, to the final realization.

The six artists, Jinyoung Koh, Hwayeon Nam, Yeondoo Jung, Hiraki Sawa, Hyun Mi Yoo, Michael Wang, in the exhibition, Spaces for Drawing, are each working in various media including painting, photography, video, computer graphic, installation, and performance to take part a new conceptualization of drawing. This exhibition looks at the relationship between drawing and other media, the extension of discourse caused by this relationship, the public role of extended conceptual work in drawing from the artistic point of view as well as from social, cultural, and philosophical points of view. During the process of developing the exhibition we asked the artists a few questions about what drawing is and what it means to them. By using various methods of media and technique beyond just what drawing is, we researched what kind of activities drawing engenders, and how drawing extends its meaning. During the exhibition, we hear new interpretations from the artists who answer with experimental and cross-disciplinary works or by taking an interdisciplinary approach. Therefore drawing crosses space and time; extends to pictorial, architectural, and hypothetical fields; it coexists and interacts with other media including performance, stage, literature, music, and dance.

Jinyoung Koh shows drawings using various methods of photography. From the traditional method to photographic manipulation: light, composition, lighting, and artificial stage management, and even image transformation, a variety of types of drawing tools are grafted into his photographic works. The artist purposefully uses photographic tools in an unconventional manner. Ordinary images, which are the object of his photography, are recomposed in a surreal manner inside the frame by using photographic tools such as lighting and setting. The spectacle images, like scenes from movies, break the illusion of social myths which surround his works by revealing the shooting process.

Hwayeon Nam considers that drawing is like a particle of a possible substance or an alibi of a possible event and it works in the role of a formula which can draw out the basic structure of the concept of a work. The process of thinking was similar to the process of molecules and atoms forming a surface. And the process appears as a drawing, it was extended to performance or choreography of a dance on paper. Hwayeon Nam found that in a chemistry book there was a basic principle of the chemistry of substances composed of molecules. She is very interested in how these molecules react to other molecules when they make other substances. And she found a similarity between chemistry principles and her thought process. So Hwayeon Nam started with basic elements that she chose, and then she tried to make a substance. But it was a little like choreography on paper. The paper is like a stage and the elements are like dancers. So it can be called a performance on paper. Also in this work there is a sense of absence because as a chemical reaction is happening in her brain over and over and over, but there is no aim. So performers are aimless. So, that is still absence but holding on to existence.

Yeondoo Jung‘s Adolescence (2010) is a vivid photographic record of a camping trip with young, healthy students in a mountainous area of Colorado as well as representation of images that present a mixture of the artist’s personal tastes, his liking for mountains, and his nostalgia for his youth. Artist did not intend to record the camping scene as it is or to capture the vivid moment of the place. He didn’t just take photos but meticulously made the scene as if painting a painting by choosing the composition, controlling the light, and fixing the tone. The photograph has the format of a snapshot capturing the moment but in fact it is a painting drawn with light which is meticulously calculated by the artist. In particular in Yeodoo Jung’s photos, the light is not just lighting but the mingling and flowing of materials between objects and the background; it is something warm, mature, and natural; it makes everything seem alive on screen. Yeondoo Jung makes drawings, in photographs, with light through a camera by adjusting the light and tone in real time.

Hiraki Sawa, well known for creating his films in his private space, transforms domestic interiors into settings for musings on the mechanics of motion and fantastically surreal events. Using hand-drawn and digital animation techniques, Sawa amplifies the mundane: breathing life into static objects. In Hiraki Sawa’s Airliner (2001), airplanes glide gracefully across the pages of an open blank book as a hand turns the pages at varying speeds. This action recalls a flip book, yet, in Sawa’s work, the airplanes are digitally inscribed rather than hand-drawn. The density of airplanes and their continual movement suggests both global transit and ominous congestion. Yet, the fleet of planes also conveys the sense of an aerial show, layering Sawa’s imagery with a sense of entertainment and play.

Michael Wang‘s interest, not just in drawing but in making traditional art objects in general, is as a kind of framing mechanism: allowing non-art systems to be perceived aesthetically, or as part of an aesthetic lineage. Or vice versa: creating a traditional frame of artistic viewership in order to disrupt this frame (for instance casting a scientist as a gallery guide, selling carbon offsets through a commercial gallery). Michael Wang think there is something about drawing, as a “planning” tool, or as a speculative kind of work. Drawing isn’t quite as fixed as painting. It’s a kind of structure. This is something that architects think about a lot. To Michael Wang rather than thinking about drawing as a material medium, it’s connected to speculative practices. He thinks about the work of architects who drew but never built. Drawing is planning, the medium that is closest to an idea, but also the first step by which an idea enters the material world. Carbon Copies (2012) is both a speculative project (it imagines another system of valuation for artworks, another system of exchange, another definition of an artwork-as-system) but also an intervention in the material world. The sale of the Copies – an essential part of the work – determines the real modification of the earth’s atmosphere.