Allover | Past Exhibitions at HITE Collection 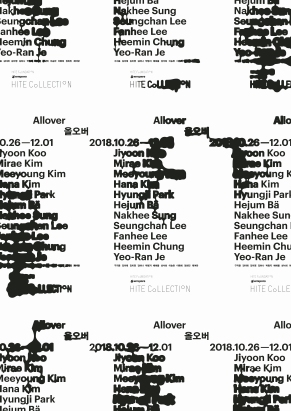 HITE Collection presents Allover as the autumn exhibition program 2018. The exhibition deals with the condition of contemporary painting as well as the questions on how we experience it, proposing to highlight the observation itself of painting. The generations of eleven selected artists including Hejum Bä, Heemin Chung, Yeo-Ran Je, Hana Kim, Meeyoung Kim, Mirae Kim, Jiyoon Koo, Fanhee Lee, Seungchan Lee, Hyungji Park and Nakhee Sung range from their 20s to 50s and present a true variety of their standpoints: some have already firmly established their visual language, while some cherish the diversity of experimental painting and others have just started the pursuit of developing their own language. Their time and art historical situation or point of start as they began painting may differ, yet it is undeniable that they manifest the present and contemporary aspect of painting in one way or another. They construct images by means of the methods which each of them pursued or established. Here, it is indispensable to consider the material element such as the material support or color of the painting along with the image itself. Below are the brief introductions to each artist.

Hejum Bä’s works are composed of color surfaces that are structured on canvas. Bä employs intense yet clear colors spread audaciously over the picture plane, whereas for the works on canvas presented in this exhibition she took colored papers and their folding and ripping varieties as inspiration. Fundamentally, this process was triggered by her reoccurring thoughts around painting. Also her acrylic drawings on paper are results of the process of giving color and material, thus, the physicality of painting, to the images that occurred to the artist’s mind. To Bä, painting is an outcome as well as a structure produced by the chain of thoughts.

Heemin Chung reckons that a single non-transparent image cannot deliver properly what she senses. She utilizes different materialities such as acrylic, oil and modeling paste: the benefit of acrylic is that its lightweight materiality applies clearly onto canvas or paper, which can suggest a great contrast to the usage of oil. Recently, her experiment has started not to be confined to the flat surface of the two-dimensionality and shows a strong impulse to cover the surface of two-dimensional or three-dimensional objects with expressive elements. Chung attempts to reinterpret Frank Stella’s past realizations of abstract textures in the space as the contemporary term of ‘non-adhesive template,’ and expand painting to a spatial narrative.

So far, Yeo-Ran Je’s paintings have developed under the same title of Usquam Nusquam. Her work began with the investigation of picture plane based on which the artist pushes and pulls the color with a squeegee over the lying canvas. In compare to the brush, squeegee is a tool that is harder to be controlled by the artist’s physicality and constantly creates accidental elements on the surface. This act lets the artist face with the dimension of the uncontrollable. It is the repetition of these processes what leads to the completion of her pieces.

Hana Kim has continuously challenged the accomplishment of the texture on the picture plane. For this, she took the textured surfaces such as glaciers, bedspreads and plywood as direct references for her painting. Often she spilled color onto canvas put on floor and left it to naturally create puddles and dry along the folds of the canvas. For works without predefined references, Kim delves into the composition and layering of pigments as well as the differing surface of canvas according to the lighting condition. Her works are staged so that these explorations become visually perceivable and palpable.

Through her paintings, Meeyoung Kim expresses her sentiments captured momentarily in her everyday life, rendered into her typically soggy texture covering the entire surface of the canvas. This effect is created by rapid brush strokes applying one color layer after another, before the former stroke gets barely dry. At the same time, Kim differs the thickness of brushes and strokes for each work achieving a dynamic sense of movement realized on the picture plane.

Mirae Kim presents graphic paintings that take not only canvas but also wood panels as support. Recently, she’s been focusing on composing geometric forms on hard wood panels with no tension, while experimenting the depth on the side that this hard material of support can reach. In the end, the paintings obtain quite thick support that will extrude visibly form the wall. In contrast, the images are painted as slick as possible, smoothing out the surface of the support. In terms of color selection, Kim refers to standard color charts such as Panton’s.

Jiyoon Koo focuses on the individual senses and psychology that one bears in the construction and deconstruction of landscape continuously repeated in our urban life nowadays, to transfer them onto her painted canvas. Through the repetition of applying and scratching color to and from her canvas, her brush strokes create the traces that could be interpreted as imageries of sleepless cities.

Fanhee Lee’s painting presents thoroughly controlled picture plane on canvas. Lee produced a series of paintings in different sizes, taking isosceles triangles as a motif depicted in a strictly frontal and bilaterally symmetrical way. Prior to starting to paint, he entitled each canvas and proceeded with working on them according to the given titles. Instead of relying on the arbitrariness of brush strokes, he controlled the properties of his material such as pencil, oil and alkyd to the maximum level, even including the cracks of the surface on canvas. As a result, his picture plane almost resembles a relief at times.

Seungchan Lee repeatedly prints on canvas digital images collected from the Internet or attempts to re-process those images by applying layers of pigments onto them. The digital files Lee collected originally represented recognizable images, yet as the plotter ink applies over and over, the images turn into an almost black surface. Even when the colors are kept, the shapes would turn into undetectable smudges of ink layers. Through this process, the picture plane will keep its original thickness of the canvas, as if dyed by pigments thinly adhering onto it. Accidental effects such as brush stroke cannot be created, since the plotter prints only horizontal or vertical lines. Hereupon, the artist introduces varying factors by cutting or layering printed canvas.

Hyungji Park perceives her painting as results from the accumulation of events that occurred during the process of repeating and making decisions. These decisions in painting are made in chain, and the failures and byproducts in the process are not resulted from unproductive consume of time but constitute motivations for continuation and present richness to the painting. She transforms images captured from mundane things of everyday into painterly gestures: while repeating to layer, fail, erase, cover and repaint, her canvas becomes a surface of irregular and “homely” painting.

Nakhee Sung arranges principal visual elements such as points, lines and planes using acrylic in her idiosyncratic way. These elements appear in different layers adjacent or overlapping on the picture plane. They are extracted as motifs for her work through re-highlighting what had been regarded as secondary elements in her previous paintings. As Sung proceeds spending a long time observing her work, the composition gains the sense of balance. While the drawings on paper experiment with the lightness and simplicity of overlapping color planes, the works on canvas change to a more solid presentation with structured composition.

The exhibition title of Allover refers to a rather outdated term that Clement Greenberg asserted many times. In The Crisis of the Easel Picture (1948), Greenberg commented on the symptoms and the multiple and simultaneous appearance of all-over in the early 20th century and described it to be “decentralized, polyphonic picture that relies on a surface knit together of identical or closely similar elements which repeat themselves without marked variation from one edge of the picture to the other.” Drawing a comparison to Schönberg, Greenberg saw of all-over painters to render every element and every area of the picture equivalent in accent and emphasis just as the composer made every element, every sound in the composition of equal importance. The painters weaved their work into a tight mesh whose scheme of unity was recapitulated at every meshing point. To Greenberg, the dissolution of the pictorial into sheer texture, into apparently sheer sensation, into an accumulation of repetitions, seemed to speak for and answer something profound in the sensibility of his era. Thus, he continued, “the all-over may answer the feeling that all hierarchical distinctions have been, literally, exhausted and invalidated; that no area or order of experience is intrinsically superior, on any final scale of values, to any other area or order of experience.”[1] His verbose explanation could still sound somewhat valid in introducing the painted works in this exhibition. The visual elements on the picture plane that many of the paintings of the participating artists present are equivalent, where the application of colors is not to be sectionalized into the center and the edges and tend to be rendered into a single surface sheer at every point. Of course, projecting Greenberg’s point as it is inevitably leads to recent debates around Zombie Formalism criticized for its revival of discarded aesthetics of Greenberg. Even though the artists of Allover are not practicing Greenberg’s tradition – as much as they are not in need to – there are certain points of encounter for their thoughts.

The curatorial approach of the exhibition also aims to question whether the attraction to certain tendencies in painting derived from my innate motivations or external influences, such as the curiosity for more recent vogue. It would be impossible to explain a curatorial motivation through a single factor, yet the current exhibition does display some South Korean and international trends in the making of a painting show. Admittedly, it is true we cannot be free from confronting what tends to be frequently shown, regardless of the tiredness or fascination that the simultaneity of repeating timelines might provide. Recently, many domestic and international institutions dealt with the condition of contemporary painting and among their exhibitions some claimed to focus on contemporary abstract painting, while some on contemporaneity than abstraction. Some were derided to resurrect abstract expressionism. Since Allover refers to these approaches directly and indirectly, it could be said that it (at least partially) reflects my attraction to contemporary (abstract) painting. However, the attribute of “(abstract)” will require more time of investigation and thus, I wish to diminish the usage of the term for this exhibition. In fact, during the process of making Allover, I struggled not only with the term of all-over but also with formless,[2] non-narrative, atemporality,[3] etc., that had been suggested by subjects in the art history or foresightful intellectuals, for defining the fundaments of this exhibition. After all, the view of the diversity of the pictures in front of my eyes made it more complicated to establish a common statement for the range of works and it felt too ruthless to label them with the term of “abstraction.” The actual contemporary aspect inescapably manifested in the exhibition as well as the exhibited works would be, thus, the state of complex entanglement where different references cannot be merged into a single influence.

On the other hand, the exhibition aspires to emphasize that paintings need to be seen in real. Our notion of painting is mostly configured by printed copies or digital data instead of actual views at exhibitions. Yet the materiality of painting can never be understood without being perceived in real. An undeniable fact is that still in the 21st century, painting goes on indeed not only as image but also as material. Therefore, instead of viewing after having acknowledged the stipulations that had been proposed through art history and other references, the actual viewing could be prioritized and lead us to the understanding of art history and references.