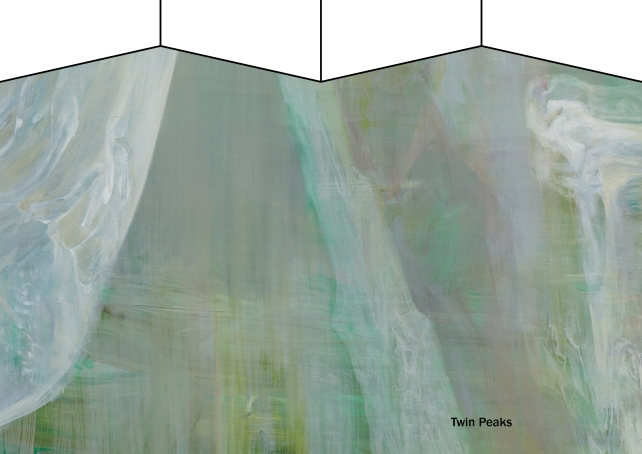 Painting persisted through eras. The exhibition Twin Peaks focuses specifically on the time period between the mid-2000s and the mid-2010s, an era that is rather close to our current one, yet marked by a quite contrary character to ours. The exhibition was conceived based on a certain degree of nostalgia as well as on a lingering sense of hope. The nostalgia is grounded on the memory of witnessing the art field in the years of the mid-2000s, while the hope indicates the questions, whether we could discover any positive subjects in the mid-2010s as we face again many uneasy conditions in the fields of art.

The title of the exhibition derived from David Lynch’s eponymous film Twin Peaks, a legendary example in American cult film tradition: the decision was made to let the two timelines of the mid-2000s and the mid-2010s face each other in parallel, at the same time seeking for an expression to deliver the notion of twoness or of being alongside; finally, as a pun, it also reflects on the meaning of a painting exhibition. Twin Peaks is also the name of two hills in San Francisco, that are not very high, but high enough to offer a wide view over the city’s nightscape. Two peaks, not too high. The reason why these hills are called “Peaks” could be because they promise a broad range of overview regardless of their moderate altitude. In this sense, among various methods and perspectives to approach painting, this exhibition aims to climb over the peaks of the timelines of the mid-2000s and the mid-2010, so to explore a possible sight over the recent practices in painting.

Twin peaks rising from the timelines – these could be grandly described to be the topography of the times. Many would prefer highlighting the high and pointy tops of the peaks, yet because memory and experience are destined to be subjective, I would like to declare that the definition of the peaks are firstly based on my subjective perspective on the timelines. At the same time, 18 participating artists were the ones who were present within my general scope of movement during those years. I became acquainted with the works of some of the artists during the time when I was a student, while some others I got to learn since around 2006. Furthermore, I met younger artists that actively emerged after 2010 through various exhibitions that were held in the recent two, three years, while I also noticed to have met some of them at their graduation exhibitions as well. Regardless their slight differences in time, Twin Peaks focuses on the timelines of the starting points of each artist’s career, rather than their ages. The artists who started working between the mid and the end of the 2000s, Eunkyung Choi, Joohee Han, Hoin Lee, Leeje, Sungsic Moon, Jina Park, Mirae Park, Sejin Park and Jahyuk Yim are grouped as the first peak of the timeline, while the ones who started after the 2010s, Kyungho Baek, Byungkoo Jeon, Hana Kim, Hyunwoo Lee, Sejun Lee, Woosung Lee, Gwangsoo Park, Junghae Park and Hyunseon Son are grouped as the second Peak.

A brief memory of the first peak could be described as follows: in 2005, still at their 20s, Sungsic Moon and Sejin Park participated to the group show of the Korean Pavilion at the Venice Biennial; Eunkyung Choi won Songeun Art Prize in 2004 and the Mirror hanging at the entrance of the basement floor in Twin Peaks exhibition is her work from 2003; Jina Park and Jahyuk Yim emerged, nominated for Kumho Young Artist, Hermès Foundation Missulsang and Art Spectrum among others during the mid and the end of the 2000s; Hoin Lee participated to the group exhibition held after the Mongin Art Center’s opening; Leeje, whose network with Art Space Pool was created after participating in group shows held at Project Space Sarubia in 2001 and 2002, runs currently Hapjungjigu, an off-space in Seoul; Joohee Han and Mirae Park are the ones whose practice I’ve been following since my time as a student. Among these nine artists – at least in the appearance of their development – there are some who steadily survived in the field without much fluctuation while others spent times of struggle due to personal and professional circumstances. After those years, regardless of the differing degrees of hardship, these artists are mingling with the new comers to create the current scene.

After 2010, my interest in the painters who emerged especially in the recent two, three years was expanded through curating Our Awesome Moments specifically, held last year at HITE Collection. The exhibition focused on introducing young contemporary painters, but simultaneously, it contained the idea of gathering painters of different generations as much as possible. The communication with the younger generation of painters was not simple, mainly because it was my first experience curating a painting show. Compared to the painters in their mid-careers, who acquired their own linguistic strategy to explain their paintings, younger painters tended to be on the way of developing their own processes of painting, and the expression through language was not necessarily on their priority. Some were also determined not to adapt to the language of older generation. In fact, they belonged to the generation whose mindset rather pursued to self-organize the spaces of representation, instead of being dependent on the conventional institutional debut or presentation. In other words, many were connected to the rising of new off-spaces from around 2014, and shared their activities. Except two artists among the ones that are grouped as the second peak in this exhibition, Kyungho Baek, Byungkoo Jeon, Hana Kim, Hyunwoo Lee, Sejun Lee, Woosung Lee, Gwangsoo Park, Junghae Park and Hyunseon Son, most of them share the experience of having exhibited at Today’s Salon in 2014 held at Common Center, one of the first younger off-spaces in Seoul. These nine artists in their early career were selected to correspond to each of the nine that are grouped as the first peak of the mid-2000s (the process worked also in reverse at times, finding the match of the younger painters from the artists of the first peak), such as the parings of Jina Park and Byungkoo Jeon, Sungsic Moon and Gwangsoo Park, as well as Leeje and Woosung Lee.

Since this first phase of the curatorial development, the objective of the exhibition is to be defined anew, over and over, as I notice the unfilled blanks still after finalizing the installation of the show prior to the opening. Yet putting apart this subjective dilemma of mine, the expectation for an exhibition that is not a thesis, that could create another valid source for thoughts and perceptions, prevails. A catalog is planned to be released during November, including the essays of three writers, Nayeon Gu, Hyukbin Kwon and Siwoo Kwon (a.k.a Shaking Joe), unfolding their own readings of the exhibition. Their visit to the show will be an absolutely mandatory premise for writing. As John Berger asserted, “the visual never allows itself to be translated intact into the verbal.”[1] The role of the writers won’t be confined to a mere translation of the painting into text, yet through past exhibitions, I was continuously confronted with the problematic of the ever-irreconcilable dissension of words and art. We are accustomed to perceive an artwork according to the guidance of the language of an accompanying text, but the excessive linguistic adornment will just hinder the actual perception. A painting is not only an image, but also a matter that conveys the traces of the artist’s physical movement. Thus viewing it on site is undoubtedly significant. At the same time, the painting has gone through too many contingencies to have its value restrained to a simple proof of the concept. As it is impossible to translate the visual into the verbal, so is the translation of a concept/words into the thoroughness of the visual likewise.